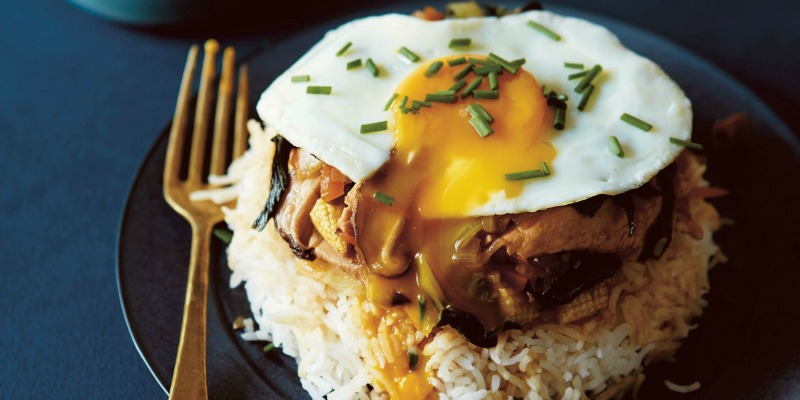 Selina Periampillai is a self-taught chef who left her city job to start a food blog called Taste Mauritius. Now Nigella Lawson is one of her fans. Find out how she created her Mauritian food business and get her recipe of bol renverse. This Creole dish translates as ‘upside-down bowl’. It’s a theatrical Sino-Mauritian dish that is found on Chinese restaurant menus and in cafés dotted across the island.

Selina, who is of Mauritian heritage, realised after starting her blog that there was nowhere in London to find tasty home cooked dishes like her mum made. So she started a successful supper club from home. This led to a book deal to share recipes of the multi-cultural cuisine in Mauritius and the Indian Ocean islands. Selina’s recipes are easy for the home cook to follow. Here she shares her story.

What is Mauritius food?

Mauritius is a tropical volcanic island utopia nestled in the southern Indian Ocean. It’s rich in colonial history and spice after being passed from the French to the British. Creole, Indian and Chinese migrants settled here to work on the sugarcane fields. This result is a country cuisine that features a cross-culture of dishes. You will find tempting street food delicacies such as crispy hot samosas filled with chillies and seasoned potatoes, thin flatbread called the dhal puri which is smeared with butterbean cari and peppered with fiery pickles, as well as split-pea lentil balls doused in tomato satini (chutney). These are all delivered in paper bags for customers to eat on the go.

What to eat when you visit in Mauritius

Look for homestyle restaurants in local villages or close to beaches with menus of the freshest seafood dishes from the morning’s catch. The dishes are often simply grilled on the bbq alongside a scope of fiery chilli pickles and mellow coconut chutneys. Fragrant glossy meat caris are simmered over wood fires, eaten with piles of rice infused with curry leaves, turmeric and buttery fried onions. And who could forget the exotic papaya, pineapples or lychees plucked from their branches, simply peeled, cut and devoured as they are? This is Mauritius on a plate.

I’m lucky enough to call Mauritius my second home. My parents moved to the UK in the Seventies to get better work opportunities and a find a higher standard of living. My sister and I were born in Croydon, South London, and it was here I spent my childhood, watching my mum cooking her traditional dishes in the kitchen. We still travelled to the island frequently in the summer holidays.

We used to have lazy sunny days playing in my nan’s backyard under the lychee tree, running through her vegetable fields. With visits to the beaches, waterfalls and tropical gardens, it was four weeks a world away from the city of London. These early memories drive my interest in exploring the myriad of flavours from this part of the world.

Mauritian recipes you can make at home

I’m constantly experimenting in the kitchen. The best part of my day is the excitement of cooking and then sinking my teeth into that plate of dhal, rice and freshly cooked rotis. My true home comforts.

Becoming a mum has changed my perception and outlook somewhat. I’m now governed by this tiny 4-year-old (who is my harshest critic!). But being able to adapt recipes and follow my senses to combine spices and ingredients has resulted in many of my meals being suited for families – mine were my recipe testers in the early days!

One I want to share with you now – Sunny-side-up egg, chicken and pak choi rice bowl, is the perfect theatrical dish — is great for kids. This recipe is from my debut cookbook, The Island Kitchen, recipes from Mauritius and the Indian Ocean islands.

(See some more recipes from Selina in The Independent.

Scroll down for more egg recipes

The Creole ʻbol renverséʼ translates (unsurprisingly) as ‘upside-down bowl’. It’s a theatrical Sino-Mauritian dish that is found on Chinese restaurant menus and in cafés dotted across the island.The surprise is in the unveiling of the perfect dome of rice, topped with chicken and vegetables in a soy and oyster sauce. It is then crowned with a fried egg, which I take great pleasure in piercing so the golden yolk trickles down the sides. You can eat this with a teaspoon of Green chilli paste with lemon (p.197) or the Ripe tomato salad with chilli & lemon (p.109).
Prep Time20 mins
Cook Time15 mins
Soaking time30 mins
Total Time35 mins
Course: Main Course
Cuisine: Chinese
Keyword: chicken, eggs, rice, vegetables
Servings: 4 people
Calories: 352kcal

50 recipes to make with eggs and leftovers