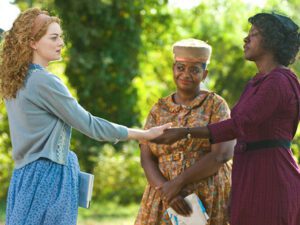 Jackson, Mississippi, looks gorgeous in The Help: stately Southern mansions sit amid Delta farmland, pecan trees shade mid-century ranch houses, and the white ladies (because they are definitely “ladies”) go about the business of playing cards and ruthlessly enforcing the status quo while wearing the most sensational New Look styles – all cinched waists and bouffant helmet hair. The black maids wear their prim uniforms with dignity.

So it would be easy to think of this movie as just another Hollywood version of white hero (or in this case heroine) “saving” the black people from oppression, writes Jennifer Howze.

In this case, the saviour would be ‘Skeeter’, the university graduate with dreams of becoming a writer. She returns to her family home and eventually writes a book about the stories and experiences of the maids that clean the white folk’s homes and raise their children.

Yet The Help gets beyond that tired old formula and I liked both the book and the movie for several reasons:

A woman who lives in Greenwood, Mississippi, where The Help was filmed, gives an interesting perspective of how instead of inflaming tensions, the movie inspired new conversations and perspectives on a shameful part of American history.

Perhaps my one disappointment with the film is that it leaves out a key scene from the book: between Celia Foote – the poor-girl-made-good who has been ostracized by the queen bees – her maid Minny and a local doctor. It demonstrates that the power that women had – white or black – was all relative. This scene solidifies Celia and Minny’s close relationship and goes some way to explaining why the petty junior league politics dominate these women’s lives – because it is the only realm they truly control.

The screening I went to was chockfull of BritMums bloggers, which was a great opportunity to have a glass of wine and talk blogs. They had some great things to say about the film as well.

Our imaginary mum-blog film poster would feature these blurbs:

Liz Jarvis: “I cried 20 minutes in and didn’t stop until the credits”

Grenglish: “It is warm and funny and moving and important”

Richmond Mummy: “Easily one of the best films I’ve seen in a long long time”

Sian at Geek Is the New Chic: “If you liked Fried Green Tomatoes, you’ll love this movie”

Holly Seddon is a writer, editor and community consultant and helped launched the community for Adoption UK, which won charity website of the year just 9 months later. She also writes a music blog.