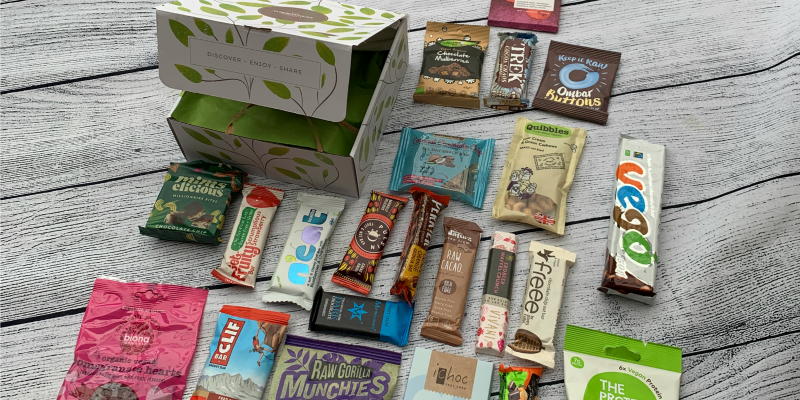 (The BritMums reviewer was provided the product free to test and review. All opinions are the reviewer’s own.)

I recently learned about a new company called Yumbles who are a curated marketplace connecting food lovers with the UK’s best small batch independent food and drink producers and I was intrigued. I love to try out new foods and learn about entrepreneurial companies that I may not otherwise hear about, and their website is a treasure trove of all things food.

After browsing the pages and getting hungrier by the minute, I found a vegan hamper to try. I am not a vegan – I eat all foods, but veganism as a choice is on the rise and I wanted to know more. From a health perspective we are encouraged to try to eat less meat, and vegan food production leaves a smaller carbon footprint than in the ‘meat and other animal products’ food chain, so I am interested to find out more and see if I could include more vegan days into my overall lifestyle.

In planning vegan days, I actually find it easier to come up with actual meals, there are plenty of online resources offering recipes and inspiration for meal plans. But what about vegan snacking? I wouldn’t have a clue where to start looking for vegan goodies, which is why I was keen to try this hamper which brings a wide range of vegan treats into one easy package.

The first thing that surprised me when I opened the package was how many chocolate treats there were! I’m not complaining – in fact I love chocolate, but I suppose I had the misconception that a vegan snack box would be all cereal bars, dried fruits and nuts! I was greeted with some very indulgent looking products and the first one I reached for was ‘Mims Elicious Millionaire Bites’! I wondered if a vegan snack would also equate to low calorie but unfortunately it doesn’t. This product was 200 calories, pretty typical for a snack I think but if I wanted something chocolate and low cal I could satisfy my sweet tooth with something lower in calories elsewhere (although this would not be vegan). On a personal level I am working on weight loss at the moment so trying to maintain a lower calorie intake is always in my mind. However weight loss aside, the box had loads of tasty choices, 26 in total – all from different providers and all new to me.

Yumbles brings together artisan products from thousands of UK independent food producers, so if you want to broaden your horizons this is a great place to start. The items sold would make beautiful and thoughtful gifts for food lovers, and also for those teenagers who are living away from home for the first time at Uni- a food hamper treat like this delivered to their dorm would be a lovely way to send a unique food parcel.

I really enjoyed trying out the vegan food hamper as it took away the guess work on my part about what snacks were vegan and introduced me to some new brands. You can see more vegan gifts from Yumbles on their website and even apply to sell via Yumbles if you are a small food producer.

Learn more about Yumbles at www.yumbles.com
They are also on Instagram

Pin it for later: Yumbles review – vegan snacks on Pinterest

Nadine is a marketer, digital creator and ex BritMums Editor who started blogging in the mid 2000’s whilst working from home around her young family.
Her blog JuggleMum won an award for video and covered many lifestyle subjects from fashion to food to entrepreneurship whilst also inspiring content creation for her YouTube channel @MrsNadineHill.
Nadine loves hanging out with her teenage children who keep her (mostly) current – although apparently no-one says ‘hanging out’ any more!
When she’s not with her family she’s at the gym or in a coffee house in Yorkshire somewhere (she’s been to most of them!) – photographing her cappuccino for the grid.
You can find Nadine on Twitter and Instagram as @Businessmum