BritMums blogger Claire Kirby of lifeloveanddirtydishes.com and family are off on holiday to Australia, but she’s panicking about what to take with her. With baggage restrictions and a long-haul flight on which to entertain the kids, here she humorously unpacks the nightmare of packing for the holidays. We can all relate.

I am in packing for a family holiday hell. I am off to Australia with the family in tow, and after 10 years of being a parent, this will be the first time we have flown since the kids came along. Normally I am packing for a week in Bude, or a camping trip, and I get to quite literally pack the car (an estate) and the roof box until it is bursting at the seams.  This time I have a luggage allowance to contend with.

Universal fact: Small people come with a lot of crap.

Wherever you go, the small people go and therefore their crap.

You need a week off just to pack the crap.

Remember when you used to fill a whole suitcase with your own stuff? All the clothes that you bought especially for your holiday, and justifying the fact they cost nearly as much as your holiday because you will wear them loads (you won’t).

Nowadays you pack the bare essentials for yourself. A bulging make-up bag has been replaced by a concealer and a travel sized mascara. You don’t pack any shoes as the only pair you will be wearing all week are the ones on your feet. 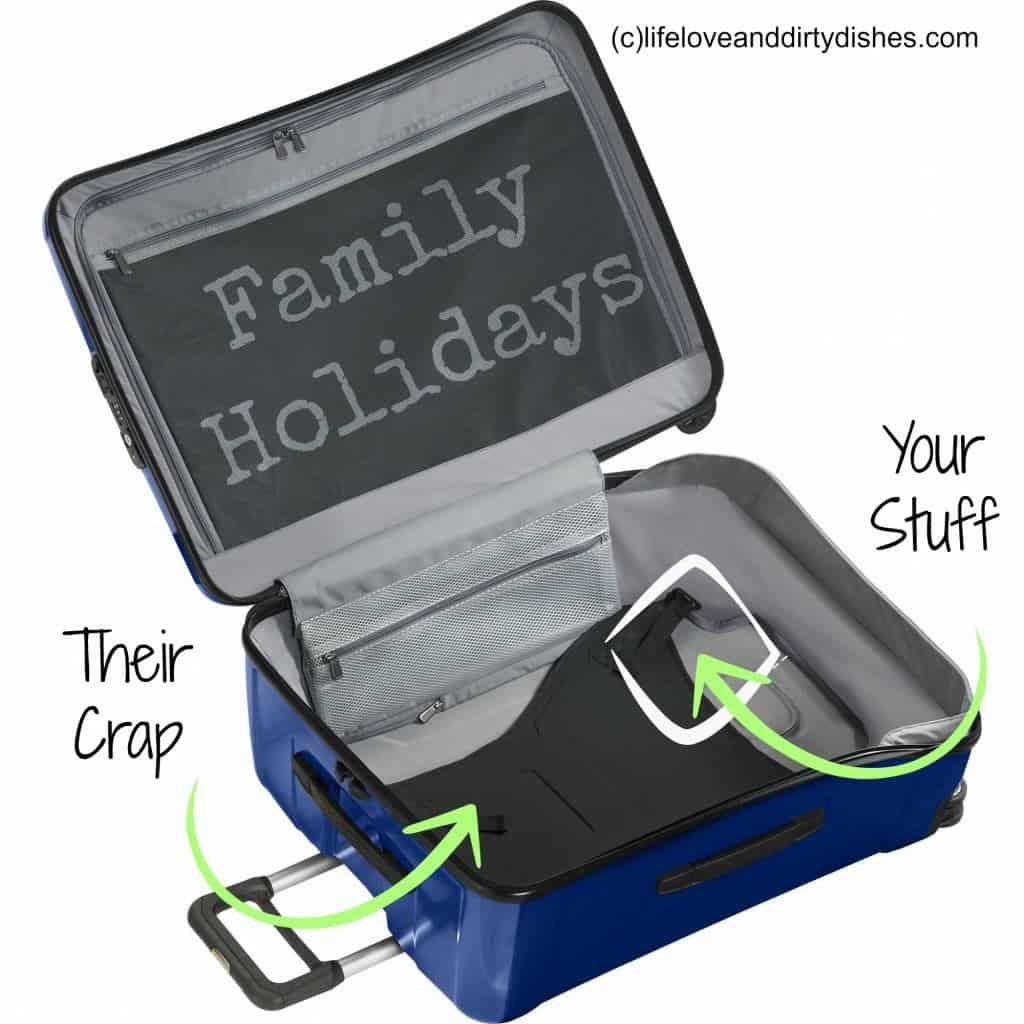 If only it were that simple when it came to packing for the small people. Heaven forbid you should forget anything. That would make you the worst mother ever. Especially if say you forgot your son’s teddy bear. You know the one he sleeps with every night and has done since he was born? The one he calls you to come get in the middle of the night when it falls out of bed. The one he whispers to before he goes to sleep. The one that has helped nurse him through illness and been to casualty and survived the washing machine. Yes, that one. What kind of mother would forget such a thing?

Yes OK, it was me.  In my defence, my husband also forgot the teddy. It can’t be all my fault surely. I realised OUR mistake 2 and a half hours into our 3-hour journey to our holiday destination. I shouted at my husband. A lot. I wept. A lot. I berated myself for being a terrible mother. I felt sick thinking of my poor little boy and how he would cope. And I hadn’t brought nearly enough wine to cope with the sleepless nights we were bound to endure without bear.

As it happens, my child is apparently very fickle and didn’t even bat an eyelid at going to sleep with a random teddy I found in the car. Poor bear.

But since that day I have lived by the boy scout motto when it comes to packing: “Be prepared”. 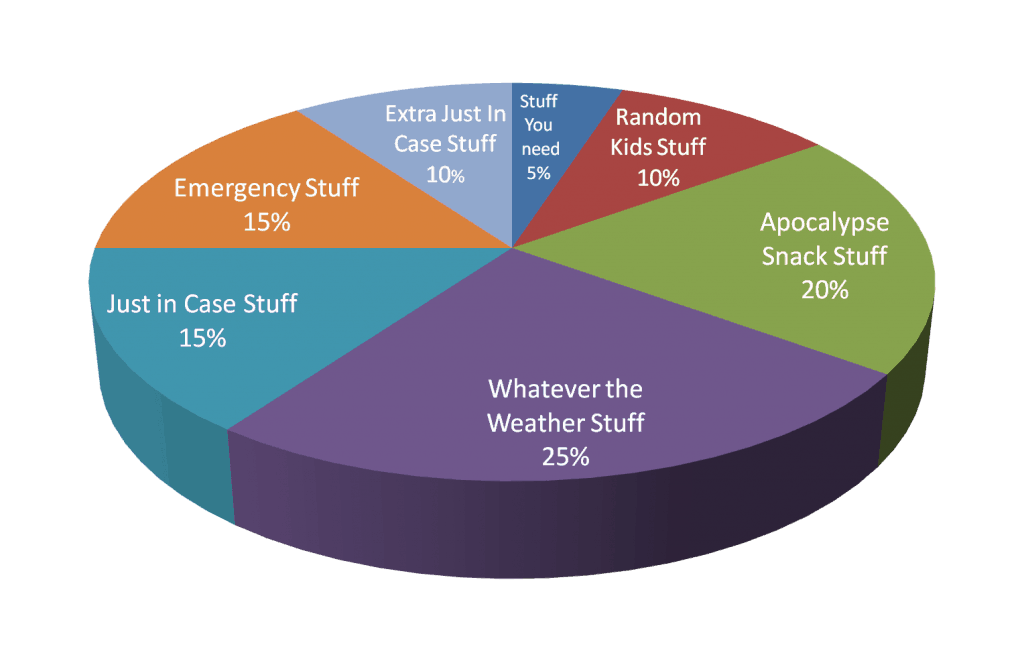 The essential things like nappies (a whole case full) and wet wipes, clothes, toothbrushes, passports and wine. The stuff you are going to be pretty stuffed without. Bear. Don’t forget the bear.

Toys that they can’t bear to leave at home but will stay in the case until your return. Colouring books, story books, buckets and spades, scooters, games, balls. A stick that the big one found and insists on taking with you.  An insane amount of stuff to keep them entertained in your home away from home.

Of course they won’t use any of it and you will instead spend an insane amount of money on lots of ‘holiday purchases’ – aka ‘cheap crap toys’.  Which you will then have to bring home again, where they will be immediately forgotten along with all the other magazine tat and pound shop purchases that were deemed essential at the time.

If your small people are anything like mine they are bottomless pits and seem to constantly be grazing. Holiday destinations are not known for being close to a reasonably priced food store. Hence the suitcase full of food that could feed a small army, but will probably not last the week with two small boys and a growth spurt. At least it will be empty before you return home and you will have space for all the cheap crap toys you have purchased.

Whatever the weather stuff

Holidaying in this country can be tricky when it comes to the weather. So you prepare for every eventuality. The suitcases are full of shorts and t-shirts, sun-cream and sun-hats but you will also find jumpers and hoodies and raincoats and umbrellas. Don’t forget the wellies!  You will curse packing all this ‘whatever the weather’ stuff because you know you won’t use it. But if you didn’t pack it, you would need it, and curse yourself for not packing it. It’s a win win packing dilemma!

All the stuff you might need but probably won’t. Extra pants for the big one in case of accidents (even though he hasn’t had an accident for 3 and half years). Blankets for the little one in case it’s cold at night. A magazine to read when you have some chill out time (ha ha ha ha ha ha ha ha).

Plasters for scraped knees, Calpol for fevers, Savlon for insect bites, treats for bribery, stain remover and an extra bottle of wine.

A few more PJ’s. Some extra nappies. A few bath toys. Tea Towels. Toilet rolls. The arm-bands the big one has always refused to wear. Anything else that will fit in my arms as I wander from room to room assessing what I may have forgotten to pack.

Of course you will only use the ‘Stuff you Need’, which accounted for a whole 5% of your luggage.

And you will still forget something.

Have you ever forgotten anything essential when packing for a family holiday? I’d love to hear your stories.

A parody of Summertime by DJ Jazzy Jeff and the Fresh Prince for all parents that have been on a road trip with kids, by myself, Life, Love and Dirty Dishes.

Josie from Me, Them & The Others, looks as why holidays are the same [email protected]#t, different location.

Sarah from Tammymum tells us of her holiday that wasn’t insta perfect.  Spoiler alert, there was rain, whinging, a nasty case of diarrhoea and chickenpox!

Hayley from Mama in Progress tells us of her softplay hell.  You can’t escape soft play even when on holiday!

And finally, Helen from Twins, Tantrums & Cold Coffee, tells us why holidays just aren’t the same after kids.

LOL: The six stages of shopping for school shoes