Hannah Beckerman is a storyteller — she always has been, as she mentions in her fascinating bio and after years of wanting to write a novel she finally did. The Dead Wife’s Handbook has recently been published. But she knows firsthand that writing a book while being a mum is not as simple as it may seem. She shares with BritMums what it was really like to get her book completed.

When I gave birth to my daughter in October 2012, I had a pretty clear plan in my head for how the next couple of years were going to pan out. I’d sold my debut novel to Penguin a few weeks before she was born and I remember telling everyone how perfect the timing was because I could work from home whilst looking after her full-time.

Yes, you read that right. I thought I was going to edit my first novel, write my second and launch a journalism career while doing full-time childcare. It was all so clear in my head: I imagined she’d sleep a lot for the first few months and then, eventually – somewhere around the one-year mark – she’d learn to play on her own, giving me plenty of opportunity to get some writing done.

There was, to be fair, a good reason for this naivete. I’d read countless articles about super-women who managed to juggle it all effortlessly: setting up brand new business while breastfeeding, writing entire novels while preparing dinner for their six children, answering million-dollar emails on their blackberry while hanging out in the park with their toddler. I just assumed these women were a) telling the truth and b) that I would be no different.

Six months after my daughter was born I still hadn’t opened my laptop. She wasn’t sleeping enough during the day or night for me to even contemplate work and I was generally too bleary-eyed to form a coherent sentence over dinner to my husband, let alone on the page for a book.

Once we’d sorted The Sleeping Issue a few months later, I figured now was the time I could finally crack on: I began frantically tapping away during every possible stolen moment: her daytime naps, the very early hours of the morning and, occasionally, during the evenings. Finally, I was starting to do some actual work.

But, of course, being a writer doesn’t just only involve sitting at a desk on your own. Sometimes you need to take a grown up phone call or turn up to a grown up meeting or go out for a grown-up lunch. And when you’re a working-from-home, full-time mum those grown up things invariably involve taking a little person with you.

In the sixteen months since my daughter was born I’ve taken her to meetings at my publishers where I’ve ended up giving her piggy backs around conference rooms while immersed in conversations about PR strategies. I’ve schlepped her along to work lunches where she’s screamed in a high chair and demanded to be allowed to romp around a restaurant if all hell isn’t going to break loose. I’ve taken work calls while playing toy xylophones and occasionally interrupting the person on the other end to sing a verse of ‘Wind the Bobbin Up’. And I’ve typed this blog post with her sitting on my lap, pointing at cats in the garden.

Perhaps there really are some superwomen out there who manage to Do It All without breaking into a sweat. But if, like me, you’re trying to do a little bit of everything as best you can and sometimes end up feeling like you’d end up doing it all so much better if you were just allowed to sleep uninterrupted for a week, know that you’re not alone.

And remember that there is an upside to being a working-from-home mum, however frazzled you might sometimes feel: not only do you keep a foot just far enough inside the professional door, you get to hang out with your little one every single day. And I reckon that’s got to be worth any number of piggy backs, even those around conference rooms in front of your slightly bemused colleagues. 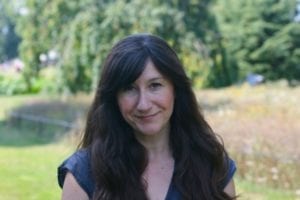 You can find more of Hannah’s work on her website Hannah Beckerman and read her blog too. Her book The Dead Wife’s Handbook is now available in paperback. Follow her on Twitter @hannahbeckerman.