Mums & Tots: How to help children when a loved one dies

It’s an inevitable part of life that at some point we will lose people we love. It’s hard enough for us as adults to process someone dying. Grief for children can be both similar and different from adults. I reached out to some parent bloggers for their advice. Whether your family has lost someone recently or you just want to be prepared, this post will help. (Wondering how to support parents and families? Here is advice from a top charity.

Breaking the news of death to a child

It can be incredibly hard to tell a child that someone is dying or that they have died, especially when we as parents are grieving too. In a post written soon after her mum died Beth explained that as hard as it was at the time she felt it was important to say her mum had “died” rather than using softer phrases to ensure her son understood the finality of death. The more gentle phrases we often use as adults like “gone to sleep” or “passed on” can confuse children.

Gemma wrote this post about how the context of films helped her children understand their Grandad’s death. She also touches on the concern that many children will have about their own mortality and how she used a book about the human body to explain the difference to her son about his cough and lung cancer.

How does grief for children affect them?

It can be hard to know how well children are processing the news. This post on Attachment Mummy reminds us that when children are struggling emotionally they can turn the pain into something physical, whether complaining of a stomach ache or negative behaviour. By encouraging conversation it can help remove the physical aspect and allow them to be comforted emotionally.

In a guest post on Refined Prose Sarah talks about how the Julia Donaldson book Paper Dolls can be used to explore death with children and she includes various suggestions of talking points. In another post a Pastoral Leader in a primary school shares why allowing children to talk about death is so important.

Should young children go to funerals?

On the practical side after the death should you take children to funerals? Opinion can be divided on this and I think it’s important to consider how your child is likely to manage, the relationship to the deceased and the type of funeral. Very small children won’t understand what is going on, but they are likely to pick up on the emotions of others. For those slightly older going to a funeral can help them to process what is happening. In this post Emma talks about why she has taken her youngest to funerals at various ages and how she believes it’s an important part of the process for them.

Mum’s The Boss Debbie’s 4-year-old asked to go to her stepfather’s funeral and a few years later she said she was pleased she got to say goodbye. In contrast my eldest doesn’t remember attending a service for her great grandfather when she was nearly 4 years old, but it did help her understand he was no longer here.

If you decide that it isn’t appropriate for your child to go to the funeral then finding another way they can say goodbye will help them. Balloon releases are falling out of favour due to the environmental impact but scattering petals, planting a tree or naming a star are all good options.

Time is a healer

Over time the pain will fade, but it is important children (and adults) are allowed to grieve and heal at their own pace. Emmy’s Mummy wrote this post a year after the loss of a grandparent saying it was getting easier, but her daughter still struggled at times. She also mentions some books and websites that can provide advice on grief for children.

Debbie wrote a post a year after her mother’s death reflecting on how her family felt at the time and the healing process. She has added that now, 5 years after their loss, they are substantially healed so things really do get easier.

There will be days when it is harder than others for instance the loved one’s birthday, the anniversary of the death or special days like Mother’s Day. This post talks about supporting bereaved children on Mother’s Day and I think the advice can be applied well to any of the special days.

Losing a pet hurts too

Death is a difficult topic to talk about whatever our age, but we are not alone in going through it and it does get easier with time. For any reader who has recently experienced a bereavement I am sorry for your loss.

If you have any additional advice please let us know in the comments below. 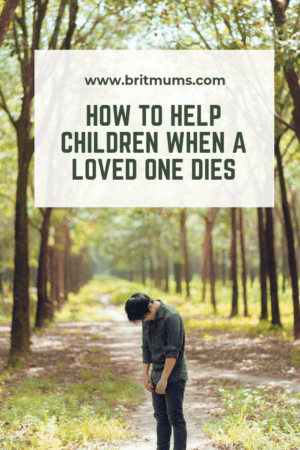 Pin it for later: How to help children when a loved one dies on Pinterest

More advice and stories about loss and grief

Kate lives on the border of London and Essex surrounded by the chaos caused by her two daughters, cat and partner. When she can distract her toddler for long enough she blogs at www.countingtoten.co.uk about honest parenting. As a co-parenting, non-dairy eating, occasionally depressed and often shouty mother of girls who love toys, books, going out and mess she covers a bit of everything and is often covered in everything. You can find her chatting away on Twitter (EssexKate), Instagram (EssexKate) and Facebook (CountingToTenBlog) when she should probably be tidying the house.

Baby Loss Awareness Week: One mum’s story
Next Post: How to support grieving parents after the loss of a baby