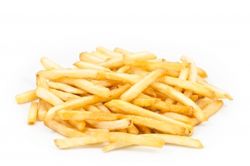 Families eat out together more than ever. But @Working_Mum, who blogs at Adventures of a Working Mum, finds the situation not quite up to snuff when it comes to the food on offer for the kids. Find out what she has to say about it and tell us whether you think the “children’s menu” should be ditched.

Apparently London has been confirmed as the gourmet capital of the world after a record 53 restaurants were awarded Michelin stars in the 2011 guide. Really? Well here’s an idea for you Mr Michelin Inspector: try eating out with a toddler. Go on. I’ll loan you mine if you like.

Take Toddler-Not-So-Tiny-Temper out to eat and you’ll soon find a whole new area of the restaurant scene. Introducing the dreaded ‘Children’s Menu’. Not so fancy now is it? The main menu may be full of ‘seared breast of this’ and ‘tartare of smoked that’ but ask for a children’s menu and the options are somewhat limited. All together now mums: “Fishfingers and chips, sausage and chips, or pasta with tomato sauce”. We all know it – it never changes.

If you’ve seen my blog you’ll know I’ve been ranting about this recently. OK, I’m sure if we were in one of those glorious Michelin-starred havens they’d create whatever hand-picked-truffle-shaving-enhanced delight our child desired, but what about all the nice restaurants, lovely gastropubs and well-known quality food chains that are so keen so foist this junk food onto our little ones?

We, as mums, are being blasted from all sides about our overweight children, the ‘junk food generation’ who don’t know what vegetables are. So how about turning the heat on some of the chefs for a change? Why do they think it’s acceptable to put zero effort into the children’s menu? And zero taste? And zero goodness?

I have started asking for half portions of ‘real food’ for Toddler-Not-So-Tiny-Temper, but you’d be surprised how many places won’t do it. Why on Earth not? It should be easy – half the portion, half the price. It’s not rocket science.

Restaurant owners, chefs, I’m begging you: please ditch these awful children’s menus and just introduce mini-portions. It doesn’t have to be across the whole menu, just a selection of dishes offered in miniature. Happy children, happy mums. And trust me, if mum isn’t happy, then no one’s happy.

There are many local places that have been blacklisted in my house for crimes against children. So come on chefs, bring on the Mini Portion and Michelin, let’s see the launch of a Mini-Michelin guide.

— Adventures of a Working Mum