Chickenpox is currently doing the rounds in my kids school.  I offer the parents my deepest sympathies along with breathing a huge sigh of relief that having been there, done that and got the scars to prove it, we will not be going through it again.

I would love to tell you that we all coped brilliantly with a week of confinement when the chickenpox came to our house.  That there was much baking and crafts and we all thoroughly enjoyed each others company.  It didn’t exactly happen that way…

Day One in the Chickenpox House

Mummy is awoken at an ungodly hour by a messy haired child informing her he has spots on his tummy.  Mummy internally groans and drags her arse from her warm comfy bed to go and assess the situation.  There are indeed spots on the child’s tummy.  There are also spots on the child’s back and face.  Mummy wonders how the hell she is supposed to know if it is Chickenpox or some deadly virus.

Mummy dispatches the child back to his bedroom and refers to Google.  Mummy feels quite sick after several Google images.  Mummy calls the child back to her room to assess once more and ask questions regarding itchiness.  The child seems very pleased to learn he will not be going to school today and immediately asks if he can play on the Wii. Mummy utters some “We’ll sees” and takes photographs of the offending spots.  “Do I have Chickenpox Mummy?” asks the child.  Mummy still doesn’t know, and thinks this is the kind of shit they should warn you about in the hospital before they allow you home with a baby.

Mummy sends the spot photos to Daddy, Nana, and her friend, for diagnosis.  Nana and her friend think it is indeed chickenpox.  Daddy is as clueless as Mummy.  Mummy cancels all plans for the week and wonders if there is enough Prosecco in the fridge to survive the captivity.

The rest of the day is spent counting spots, applying calamine lotion and ignoring all rules about screen time.

Day Two in the Chickenpox House

The child wants to go back to school.  Mummy explains 24 times why that is not possible. She issues the command “Don’t scratch” on average every 90 seconds, and hears the words “I’m bored” every 6 minutes.  The toddler has began launching himself off the sofa in an effort to release his pent up energy.  Mummy wonders if it is acceptable to take your child with the chickenpox along to the emergency room to have his brother’s head stitched back together?

Mummy nearly temporarily looses her sanity when she thinks about suggesting some crafts, but luckily she remembers in time that try as she might she is not a crafty mummy, and crafts always end in tears.  And mess.

Mummy considers baking, but assessment of the cupboards reveal flour that went off in 2014 and a distinct lack of chocolate chips.

The day is rescued when Mummy suggests a disco in the lounge.  This is agreed to on the principle that only songs by One Direction are allowed.  Much fun is had but after 2.5 hours Mummy fears she has been brainwashed as Harry Styles is looking increasingly sexy, and Mummy is sure that thinking that is very very wrong.

There is no food left in the house.

Day Three in the Chickenpox House 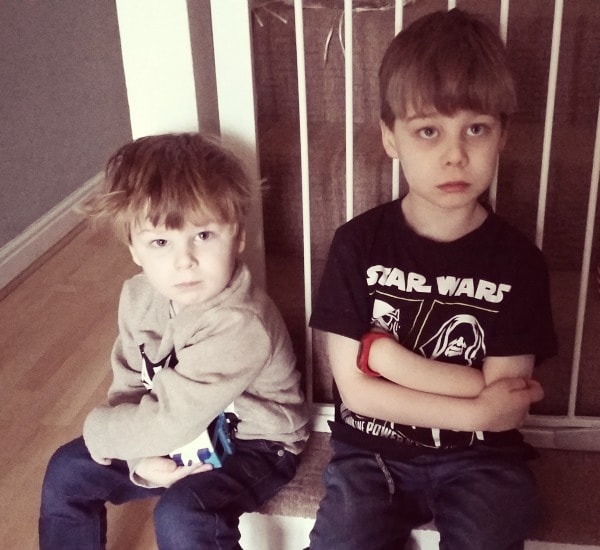 Mostly spent like this.  Mummy may have lost her shit.

Day Four in the Chickenpox House

The house has been deserted.  Mummy and the two children have escaped captivity and hot-footed it to Nana’s house for a change of scenery and some adult conversation.

Mummy can see the end in sight as the spots have nearly all scabbed over.  Mummy is happy until she remembers it’s sodding half term next week.

Day Five in the Chickenpox House

The child has remembered that he was supposed to be doing his class assembly today. He demands to be taken to school so he can perform as he is not exactly the shy and retiring type. Mummy explains several times why that is not possible.  There is much shouting from the child and refusal to do anything unless he is taken to school.

Mummy makes an emergency call to Daddy to calm her down.  Daddy makes Mummy laugh and she feels better.  Mummy gives the child a big hug and tells him she understands he is sad about missing his assembly, and that she is too and she is sorry she can’t take him.  The child cries.  Lots.  Big sobs and lots of cuddles.

Mummy cheers the child up by suggesting they go and get a McDonald’s and thus looses all entitlement to mother of the year award.  The children are deliriously happy to be leaving the house again, even if it is just to go through the drive through.  Mummy gives in a buys donuts too just to keep them happy.

Day Six in the Chickenpox House

Daddy is home.  Mummy spends the day upstairs catching up on work and thoroughly enjoying the time to herself.

Day Seven in the Chickenpox House

The spots have all scabbed over.  Freedom!  Mummy plans a day outside of the house tomorrow.  Mummy is giddy with excitement at the thought of leaving the four walls that have held them captive.

Mummy congratulates herself on surviving captivity and gets slightly tipsy that night once the children are in bed.

Day Eight in the Chickenpox House

The world seems to be conspiring against Mummy.  Plans for adventuring outside today have been cancelled due to Doris.  The storm, not the old lady.  Mummy hopes things will brighten up in the afternoon.

Things do brighten up in the afternoon but Mummy is pinned to the sofa by a sleeping toddler who has a temperature.  Mummy is very suspicious and spends the rest of the day checking the toddler for spots.

Day Nine in the Chickenpox House

Mummy gets the toddler dressed and discovers he is covered in spots.  Mummy knows this time without a doubt or goggle that it is the [email protected]*#ing-pox.  She knows because the toddler resembles one of the Google pictures that made her feel nauseous.  There are spots EVERYWHERE.

Mummy doesn’t know if she’s brushed her teeth, let alone what day of the week it is.  Sleep deprivation has caused Mummy to tumble dry the dry dirty laundry, and have a shower with her bra on.

Day Thirteen in the Chickenpox House

A new lotion works wonders on the toddler and finally the spots begin to look less angry, although the toddler’s big brother, the very one that gave him chickenpox in the first place, refuses to touch him, and screams if the toddler goes anywhere near him.

Mummy begins to worry about scars and how long it will be before she can leave the house with the toddler without people crossing the road to avoid them.

Mummy and the toddler climb the walls whilst the spots scab over.  16 days of confinement has taken it’s toll on Mummy and she wonders if she will require some rehabilitation to acclimatise to the outside world again.

Daddy is very pleased (read not at all pleased) because in the time Mummy has spent staring at the four walls she has planned a new decor for every room in the house, and submitted a very thorough and hard to argue with proposal as to why they should get a cat. Mummy also bought a lot of random crap from ebay which will be arriving in the next 5 – 7 days.

Sending thoughts to all those going through the chickenpox hell right now.  It still kind of smarts that there is no medal at the end of it.